(text taken from the L.A. Examiner) 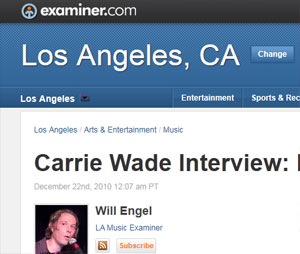 Our interview begins with a discussion of Los Angeles:

W.E. What are your analytic impressions of Los Angeles and how does L.A. relate to your music?

C.W. I think to a large extent it’s no different than it was decades ago – a land of broken dreams and of fortunes made. And you feel that of course. The thing I think I like the best about L.A. is that it is, although it’s easy enough to forget at times, the desert – and real close, close enough to get there pretty quickly, to the part of the desert that stayed desert. You do feel that even here in L.A – I like that. I think for folks who have a love affair with the West, remarkably enough, there is still some of that romantic Western feeling here. The gold rush. Cowboys. Cactus. Cracked earth beneath your feet. The dry heat. It is interesting to me that an awful lot of singer/songwriters can feel (and do) that mystical, somewhat threatening and aesthetically gorgeous landscape that is the desert. You can hear the desert in a number of songs on this album. I would say especially in “Drive.”

W.E. What do you hope comes across in your performances?

C.W. I am hopeful that what manages to translate is a soulfulness. I believe there is an obvious honesty and (my own brand of) truth. Everyone’s truth is often their own but there is of course some overlap and that’s what is so wonderful about being an artist – that you can be honest to yourself in the communication of your thoughts and feelings and still manage to tap into some kind of universal truth – and that’s what you hope for – that you reach people just being yourself. Witnessing my live performances, I believe it is clear that the music reflects past challenges, but I believe it is also clear that there’s a big time appreciation of the beauty of life and an optimism and hopefulness in the face of life’s struggles. I’ve heard some nice things about my (guitar) playing, but I still feel I could be a better player. I’m not dead yet so that could happen (smile). I think those in the audience get that I consider myself to be lucky enough to play my songs in venues where people seem to enjoy what they hear – that, in and of itself, is such a blessing and a gift indeed.

Carrie Wade is the Super Bowl champion when it comes to the art… to the science, of soulful singer-songwriting. Her words throughout the interview ring thoughtful, contemplative and passionately true. Like a perfect melody, she drives deep to the melodic core in her search for answers, arriving at the heart of the meaning and sound:

W.E. How would you describe your sound in 10 words or less?

C.W. Acoustic guitar-based hauntingly melodic folk-pop-rock? Even though I don’t think this is entirely accurate, I liked it: “…articulate funky Acadian Folk & Blue-Grassy syncopation, under rich soulful bohemian vocals & lyrics…” quote by Glynn David. What about you, Will? What would you say?

W.E. I agree and I would add: it sounds like a cross between the joy of heaven, the sadness of truth, and the dreams that are our lives. At times, it’s achingly beautiful. I’d urge readers to listen and decide for themselves because it defies simplistic labels. Let’s talk influences for a minute?

C.W. I am using “influences” not as who I feel I sound like but rather the music I know has made an impact on me and has perhaps influenced my musical aesthetic to a certain extent:

Sun Kil Moon, Thomas Dybdal, Nick Drake, Opera, Bowie, Joni Mitchell, CSNY, Neil Young, Cat Stevens, Earth Wind and Fire, Ohio Players, Prince – lots of funk, soul, Arabic and Salsa music from my folks – my Mom and Dad were amazing Salsa dancers and great appreciators of music. My Dad brought home stuff out of the South End in Boston at a time when people who lived there did NOT know who Abercrombie and Fitch were (smile). My Mom would vacuum alternatively to Madame Butterfly and Heroes. Big Tom Petty fan, Willie Nelson, Shelby Lynne, Jackson Brown, the Eagles and Don Henley, old Celtic hymns, old Tibetan music, Aaron Copeland (the composer), AC/DC, Soundgarden, Chris Cornell, Old Faces and Rod Stewart, Hendrix – it goes on forever and at the moment, of course, I’m unable to remember all of it. I truly believe that what you bond to almost immediately ends up influencing you as a songwriter in ways that you cannot and do not even imagine.

W.E. In creating this masterful album, what was The Production Experience like?

C.W. Interesting. Very. And quite long. With spurts of time where I couldn’t do it or pay to record or whatever. I had the good fortune of meeting New Zealander Peter Kearns on-line. He was soliciting his services through a songwriting organization. We talked on the phone (me in Los Angeles and he in New Zealand), I played him my songs live over the phone – acoustic guitar and voice. I heard some of what he had done. The vibe between us was extremely strong. I could just tell that he’d be able to do what I thought we could do. I sent him a four-track cassette with the songs just voice and guitar. He used those as guides and layed down midi-tracks and real instruments. Peter’s a genius.

He nailed down arrangements that really took him relatively a short period of time. He’d send me first drafts, I’d comment, he’d send me back another MP3. But seriously, I think with most of the songs he just nailed it first try. Maybe certain things would change but ultimately, the “feeling” of the song was more often than night totally “right” first time.

Somehow, he heard strings following down a note progression that sounded like film circa late 60s i.e. Midnight Cowboy, Alfie, Dr. Zhivago… that kind of wistful melancholy. I had heard that before he and I even got started and somehow, he got it himself. So I didn’t have to explain any of that to him. I told him to follow his nose because it was working and at a real early time in it all. Some of the midi stayed which was fine with me. And some was replaced by organic instruments. We kept the midi strings in “Drive” but I wanted real strings for “Sublime” and I got them.

I also worked with a wonderful engineer and tremendous human being, Meghan Gohil, in Hollywood for a while. His input was invaluable. I wrapped the album up (and did an awful lot of work) with another freakin’ genius – Marty Rifkin. Marty’s resume is insane (Springsteen, Petty, Yoakum, Jewel) and the nicest guy – very special. He’s a multi-instrumentalist and added amazing tracks. He was also responsible for the final mix which I am extremely pleased with. The production process start to finish was long, joyous, frustrating, exciting, and in the end, amazing – I learned a LOT. When all is said and done I believe I had a healthy hand in the production of this album and I’m proud of that. Getting this album done was so important to me – and to listen to it and find myself smiling, is, well… just a great feeling.

Read the review online below or download the pdf HERE